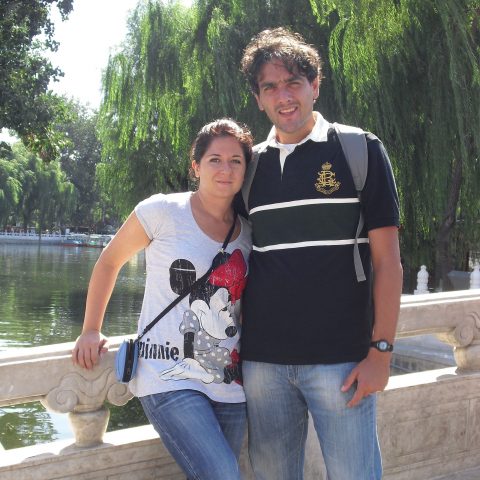 Matteo can welcome students with special needs such as vision or hearing impairment, students in wheelchairs, students with learning difficulty (such as dyslexia) or behavioural disorders (such as ADHD).

In addition I am a Qualified Italian Language Facilitator and I work in nurseries, primary schools, middle schools, and secondary schools. The above-mentioned qualification enables second language learners to improve their Italian proficiency in key language aspects such as listening and writing using playful teaching methods. My wife Rosanna works as an employee for a renewable energy firm. She is a very down to earth person.

We live in a two story house. My wife and I live on the upper floor. The lower floor has a independant flat where I can host my students; it includes a private kitchen, two bedrooms, a private bathroom and a large living room. In addition, we have a big garden, a small bedroom with a single bed and a wardrobe, a large bedroom with a king size bed and a small single bed. There is a private bathroom next to both rooms.

We live in a very beautiful area in the Northwest of Italy called “Biellese”. Our house overlooks the surrounding beautiful Alps, the “Prealpi Biellesi”.

Turin is a beautiful city which was the first capital of the Kingdom of Italy. I like to walk with my students across the city centre, from piazza Statuto to the Po river.

Turin is the second town in Italy, after Bologna, with the longest “portici” (colonnades) which were originally built in 1615 by king Vittorio Emanuele I. The village we live in, Candelo, is located in one of the most beautiful areas in the Northwest of Italy, the “Biellese”. We are located in a very strategical area: 20 minutes away from the mountains, 1 and a half hour from Milan and one hour from Turin. Candelo is one of the fifty most beautiful villages in Italy known for its old town called “Ricetto”.

Wifi throughout, smokers not accepted, garden.