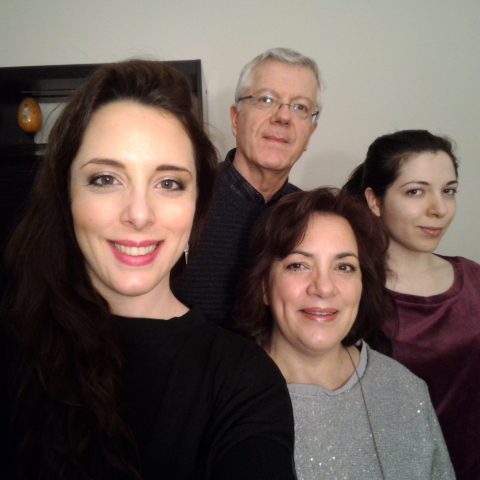 Ilaria is an Italian teacher, as well as a translator (from English and German to Italian). She has helped privately a lot of students since 2007 teaching English, German, Italian and Diction. She is also a professional actor, so she teaches the correct pronunciation of the Italian language. Ilaria lives in an apartment situated on the fifth floor. Her father, mother and sister live in a other apartment located on the fourth floor of the same building.

My name is Ilaria, born in 1987 and Vegetarian. I love animals, particularly cats, but I don’t have any pets at home right now. I’m also an actress? singer and lived in Rome seven years. I love musicals, going to the cinema, spending time with friends or chatting over the phone with distant ones. I have a Foreign Languages degree, a Diploma in a Theatre Academy and in a Musical Theatre Academy. I’m keen to help foreign students improve their Italian and showing them my beautiful city, Turin. I’ve had very young students (14 years old) as well as elder ones (69 years old) and I really don’t mind the age gap!

On the contrary, I think that differences in general (age or culture) are always enriching. During my lessons, I try to connect with my student and understand which are the best ways for her/him to learn. We practice speaking, listening, writing, reading and do activities together, according to the student’s interests. As far as my family is concerned, my father is an aeronautical engineer (now retired), my mother is an Italian and History teacher in high school and my sister, born in 1994 is a university student. Sometimes we eat lunch or drink an afternoon tea all together with my student, who can engage a conversation with other people and not only with me!

My home consists of a two bedroom apartment located on the 5th floor with a lift, my fathers’ office, a living room, a kitchen, a bathroom and two balconies (from which you can see the beautiful Alps). In the student’s bedroom, there is a double bed with two little nightstands, a closet, a mirror and two chairs. The entire wooden furniture was handmade by my great grandfather. Wi-Fi connection available.

I live in a suburban area close to the city centre (20 mns by car or 30 mns by bus). There is a nice park nearby (Parco Ruffini) and the area offers all types of stores. The airport, Caselle, can be reached in 20 mns by car, and 1 hour by bus or train. The nearest train station is Torino Lingotto (4 km away), but it is also really easy to reach the two bigger train stations, Porta Susa and Porta Nuova by car (15 mns) or by & underground (30 min).

Turin is a beautiful city which was the first capital of the Kingdom of Italy. I like to walk with my students across the city centre, from piazza Statuto to the Po river. Turin is the second town in Italy, after Bologna, with the longest “portici” (colonnades). These were originally built in 1615 by king Vittorio Emanuele I,

so that he and the Royal Family could easily walk across the city centre even in rainy days without getting wet. There are many things to do, to see and to visit: the Museo Egizio (the second largest museum of Egyptian antiquities in the world after the one in Cairo), the Mole Antonelliana (Turin’s architectural symbol which hosts the Cinema’s National Museum), Palazzo Madama, the Royal Gardens, The National Automobile Museum, Parco del Valentino (with the beautiful medieval village). Around the city there are several parks such as La Mandria Regional Park and the Parco della Palazzina di Caccia di Stupinigi, once hunting grounds of the Savoy family. In the nearby city of Venaria Reale, there is the stunning Royal Palace of Venaria (part of the UNESCO Heritage List) with its marvelous garden (also called “The little Italian Versailles”).